The History of the American Flag

For today’s American Culture and History lesson, we’re going to learn about The History of The American Flag.

Today we’re going to be talking about the history of the American flag. And we’ll also get a. . . kind of a close look at history in general in the United States, so hopefully I’ll keep this interesting for you.

So have you ever looked at a one dollar bill? On the front and center of it, there’s a man named George Washington.

George Washington was the Commander in Chief of the American Army (called the Continental Army) during the war for independence against Britain – a war that’s known as the Revolutionary War.

In one of the very first battles, in 1776, George Washington ordered his men to place the Grand Union flag on his base at Prospect Hill in Boston. The flag had the 13 alternating red and white stripes that represented the 13 colonies that made up the United States at that time. In the top left corner was a smaller version of the British flag also known as the Union Jack.

Now, why would you want an image of your enemy’s flag on your flag during a war for independence? It doesn’t make sense, does it?

The following year, in 1777, the US made its first official flag. The 13 red and white stripes remained and the Union Jack or the British flag was replaced by 13 white stars in a circular formation against a navy blue background. These stars represented a new constellation, a new united nation and an independent one at that. The U.S. won the war and the first official states were Delaware, Pennsylvania, New Jersey, Georgia, Connecticut, Massachusetts, Maryland, South Carolina, New Hampshire, Virginia, New York, North Carolina and Rhode Island. Each of these had a star on the flag. 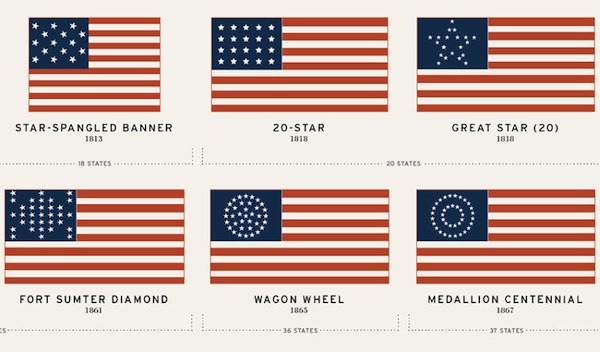