For today’s American Culture and History lesson, we’re going to learn about The Donner Party.

Let’s go ahead and begin with the fact of the day. We’re going to be talking about the Donner party. Just to be clear, when I say party I mean group.

In the 1840s in the US, many parties formed to make their way across the United States and to settle on the West Coast. It was a time of westward expansion or manifest destiny which was the idea that it was America’s duty to settle land, right, to inhabit land, particularly to the west. Also, many of the first pioneers were driven by the idea that life was better in California and in Oregon, that the land was fertile and ideal for agricultural purposes.

That’s what the frontiersmen had written about it. The cherry on top was that they were promised land. The US government at the time said, essentially if you move west you can take what land you want for free. So many dreamed of having their own homesteads, a house with a farm and fertile land surrounding it.

So in April 1846, on the promise of a better future, a lot of pioneers left from Independence Missouri and began taking the Oregon Trail. The trail that pretty much all pioneers at that time took to come to the west. The Donner family, the Reed family and many others planned to do the same.

So they created a wagon train, which is a single file line of covered wagons that traveled together, one family after the other so that they could have a sense of security. Imagine if a wooden wheel broke, they could get assistance from another wagon or from another group of people. 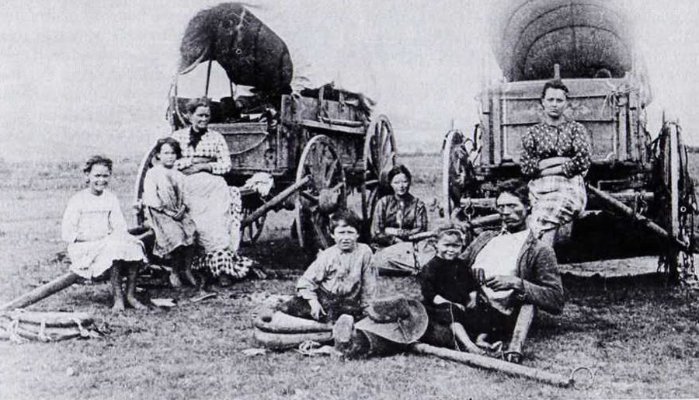 The rest of The Donner Party text, including annotations, can be found in the American Culture and History Course (Part 2). See below.