For today’s American Culture and History lesson, we’re going to learn about The California Gold Rush.

So today we’re going to learn a little bit about the Gold Rush. So in order to understand this magical story, we have to flash back to the year 1848.

In 1848, a man named James Marshall saw a piece of gold in the American River near his home in Coloma, California. This is a city northeast of Sacramento, about 36 miles from the capital. James Marshall worked for a man named Sutter, who owned a lot of land. And he had great plans to use the land for an agricultural empire, he called it. And so he wanted to keep the gold secret. So they kept it on the DL or on the “down low” – they didn’t tell people. But it was impossible for the secret to not get out.

Someone in town named Sam Brannen, a store owner, let the info leak. He went to San Francisco, which is about two hours south of Sacramento, and told everybody that gold was found in northern California – in the American River. Rumors spread and lots of Californians, Native Americans, and just anyone in the general area came to Coloma to strike it rich. The first miners who panned for gold, got all of the easy to reach gold and they did get rich. They struck it rich. And these are the rags to riches stories that were published in the newspapers.

In fact, they were sensationalized. Rumor had it, that in just six days you could earn as much as in six months working a full-time job. People started reading about these regular, you know “average Joes”, who one day started picking through the dirt and made thousands. And in the beginning that was true. 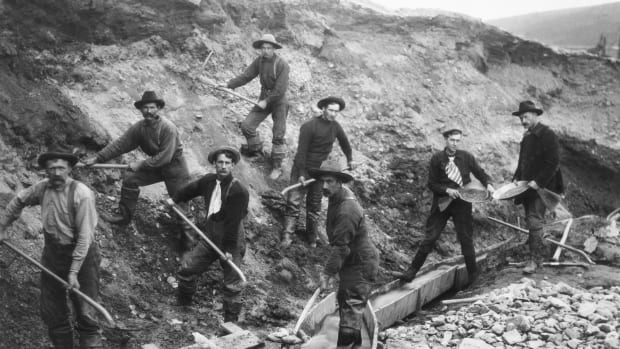