Bears in the U.S.

For today’s American Culture and History lesson, we’re going to learn about Bears in the U.S..

Now what’s the deal with bears in the United States? There are actually a few types of bears in the U.S.. Grizzlies are the ones you probably best know from Hollywood films. These bears are brown, and can stand between 5 and 8 feet tall and weigh up to 800 pounds according to National Geographic. They can run up to 30 miles per hour.

Well, although there are about 55,000 grizzly bears total in North America, there are only about 1,500 living in small isolated areas in the states of Idaho, Wyoming and Montana particularly in Yellowstone National Park. They inhabit dense forests, subalpine meadows, open plains and arctic tundra and historically actually lived all over the U.S. and down into Mexico.

So as you may know, California’s flag has a giant grizzly on the front, but in fact the last grizzly was killed in California in 1920.

Black bears, on the other hand, are the most prevalent type of bear in the United States. And they’re considered to be medium in size. Adult males typically weigh between 57 and 250 kilograms or 126 to 551 pounds, while the females weigh between 41 in 170 kilograms, or 90 to 375 pounds. And these bears can be found in forested regions in 40 of the 50 states mostly along the east and west coasts and up into Canada.

At this point in time, there are about 600,000 total black bears in the wilderness. And black bears eat the same food as us. They’re omnivores. So they eat berries, plants, really anything you can imagine. And they spend their whole lives looking for food.

So remember (that) bears hibernate, they sleep during the cold winter months, and so they need to increase their body weight before they go to sleep…. 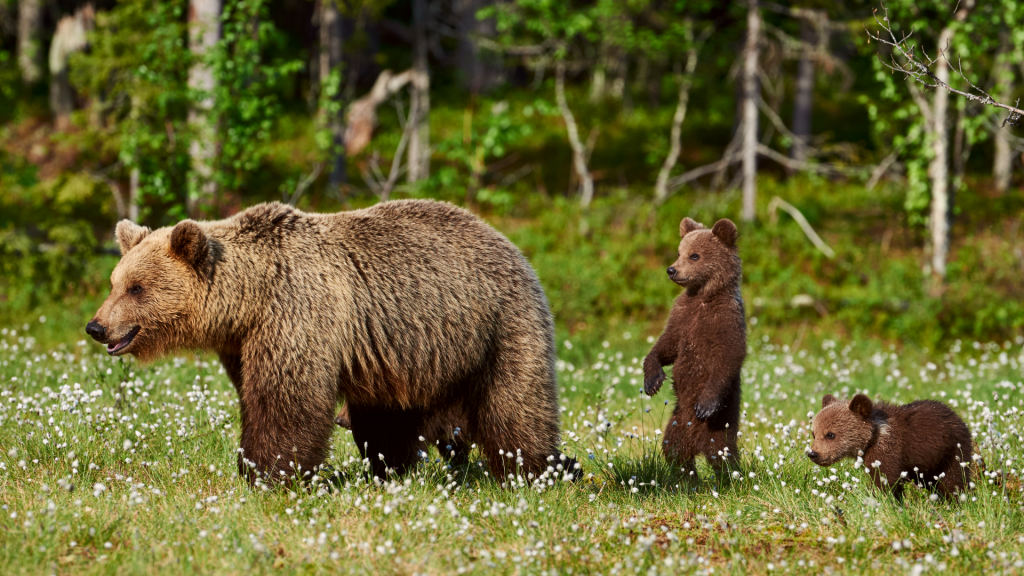 Family of Grizzly Bears in Alaska